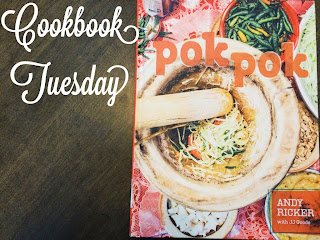 Ahhhh! It's Cookbook Tuesday, my favorite day of the week.  It's like kindergarten show and tell, but every week I bring a cookbook.

This week I chose Pok Pok by Andy Ricker.  Like Ivan Ramen, it is a book about love and obsession, but this time Thailand and Thai food.  Shane got this book for our one year anniversary.  It's paper and it represents us.  I know its kinda weird and odd that a book could represent a couple but it does. 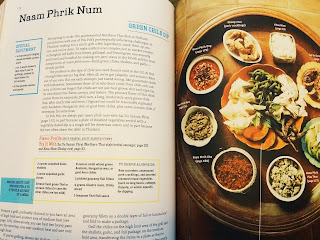 This isn't an ordinary Thai food cookbook.  Andy Ricker keeps it real.  The recipes and procedures in the book are the recipes straight from a Thai kitchen or street corner.  Every recipe is also prefaced with a short essay that relates to the meal and paints Andy Ricker's Thailand. 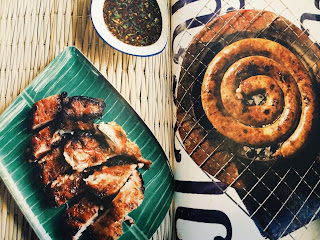 To me, Thai food in America is dumbed down.  I went to a Thai restaurant in Long Beach and we ordered the Som Tam or papaya salad.  This usually has dried shrimps which I enjoy...because I'm that Asian but it is good.  This restaurant listed the dried shrimp but it was blacked out. Shane questioned why there isn't dried shrimp in the salad and the server said, "It's not good with the shrimps in it."   I've had it at other places and I've made it with dried shrimps and it's good. We didn't want to argue.

In this book, it is important to make the recipes the way that is described.  It may not be the best or easiest way, but it is the way it is done in Thailand and it's delicious. So why fuck with something that is delicious? Right. That is why I love this book. 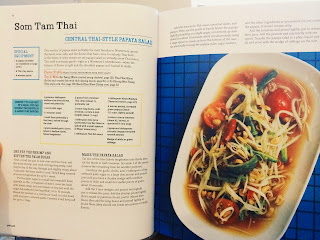 Have you seen Farang yet? It's the documentary about Andy Ricker on Vice Munchies.  I posted  a link the the July 5 favorites.  Oh you missed it?  Here is it again. It's free!