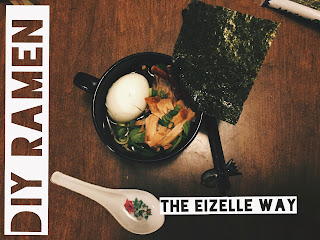 Last night I made something that I would like to think is a ramen. I mean bought ramen noodles for this specific dish. But I guess you can say that the broth isn't really a ramen broth. Adn I ate it out of a mug that I got at a ramen/sunglass colab party at Port.  The egg was a bit over cooked to my liking; I let it boil too long.  There was no bone in the pork loin roast. I used a pork loin roast. I used the pulp from the green juice pulp in the both. I used powdered konbu and katsuobushi. I used a vegan bouillon cube. Dear ramen Gods, please forgive me for I have sinned.  I'm sorry Ivan Orkin. I went rogue.

You see, as a part of a new year resolution, I was given a mission to try to use up what we in the larder. I guess you can say I kinda failed because I bought ramen noodles when I knew that we had buckwheat soba noodles. I guess I needed a reason to actually call it ramen and I didn't want to anger the Gods any more than I already did.  I already had the powdered konbu and katsuobushi. I also had this roast in my freezer. 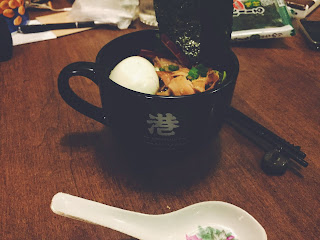 And now for the important part, the broth. I made use of my slow cooker because it was Tuesday.
The night before, I made an equal part combination of salt and sugar and some pepper.  I covered the the pork loin roast with this mixture, set in in a bowl and let it sit overnight. In the morning, you will notice a bit of liquid excreted from the meat, drain that shit. I got my cast iron nice and hot and seared the pork all around in bacon fat for about 3 minutes on each side.

Meanwhile, I worked on getting the ingredients into the slow cooker. I dissolved the vegan bouillon, konbo and the katsuobushi, added a carrot, scallions, white parts included, celery, and onion.  I added about 3 cups of water and a dash of soy and rice vinegar.
I stated making my own green juice, and the byproduct of green juice is the vegetable pulp. You get a lot of it.  So I freeze it for later use. I had a little log of green juice pulp so I threw that in there too. Add the browned pork roast, set cooker to low, and then get yo ass to work.

Remove the pork and strain the broth. I strained it two times in a fine mesh strainer. I returned the broth and pork to the slow cooker and set it to high for about an hour, I went on a run.

Cook the noodles and egg.  I used the same water because we're in a drought.

Then I added the following: 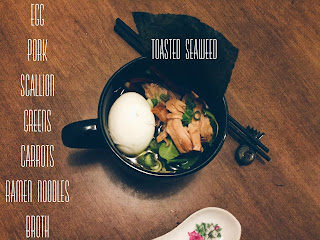 It was so good and comforting, especially when it's cold out and cloudy out. Then I realized that, I made something was good and it's mine, all mine.  When I was looking for recipes for a slow cooker pork loin roast, I noticed it was a lot of tacos and pull pork bbq. It seemed like it was all anyone ever makes in a slow cooker. I didn't want that shit. So I read a few posts on broths.  Took some ideas here and there and boom! My DIY slow cooker ramen was born. Not traditional but functional for a working bitch like myself and my friends. It's Eizelle's way.  And you know what, fuck the ramen Gods, because I think I just made them up.

But, if you do want a kick ass recipe for a legit ramen broth, check out Momofuku Ramen 2.0.  It's also Ramen Month on luckypeach.com so you can educate yo self!
Or check out Ivan Ramen at the library.


Things to note for next time:
I have a pile of chicken neck bones in my freezer, roast and use those.
Get a pork roast with a bone in, it will make for a meatier broth.
Used dried shitake mushrooms.
Consult Ivan Ramen and Momofuku books on my shelf