It's Everyone's Favorite Day of the Week After Cookbook Tuesday 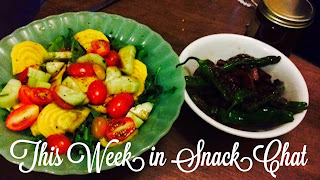 While there isn't really any backing to the title of the post, This Week in SnackChat is pretty consistent.  I sent out that top image.  It is a meal made from farmers market goodies.  It has been really hot so salads and anything that requires a stove to be on for less that 10 minutes have been the meals we've been eating lately. As a bonus, I am including a recipe for that dark mass of Shishito peppers at the bottom of the post!

This week the SnapChats come from three friends, Travis, Mike and Chucho. It almost plays out like a joke. Send me SnackChats via SnapChat: log.lady 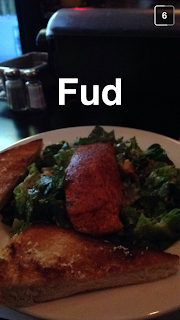 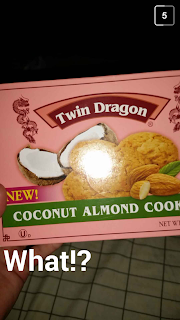 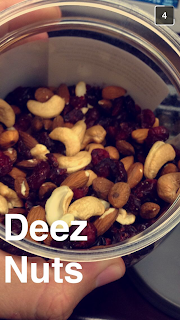 1/2 lbs or less of sausage ( I used Filipino longganisa because that is what I had on hand. I also think Spanish Chorizo would work well too)

half of a lemon, juiced

1. Since the sausage I used was already cooked, I cut them into bite size pieces and fried them in my cast iron. Let them get a little char on each side. Remove from pan.
2. Use the fat that is left in the pan, if not a lot rendered out, add a little more, and add peppers. After about 2 minutes add juice from half a lemon. Cooked till blistered.
3. Add sausage. Mix around. Season
4.Consume.