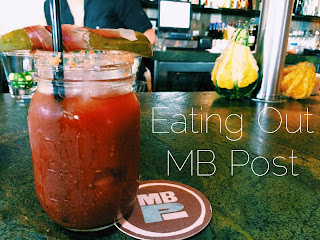 I saw a check in from someone on Facebook at 3:00pm at some restaurant in LA and the comment preceding the check in was, "Late Brunch"  Ummm to say you're a little late for brunch gurrrrlll is wrong because, after three you are in lunner territory. Also maybe reevaluate your life if you are "brunching" at 3pm. Because serious real talk, someone that is alls grown up should have already eaten by least 1pm. I don't care where the fuck you are eating.
Brunch in its purest definition according to Wikipedia is, a combination of breakfast and lunch eaten usually during the late morning but it can extend to as late as 3 pm on Sundays. But I like this definition too: a late morning meal eaten instead of breakfast and lunch.  I guess I shouldn't call this the a brunch post because we ate lunch or at least that is what we like to think we ate.  Brunch has a different meaning to a lot of people. I like to think that we took the high road and skipped breakfast all together and got lunch. 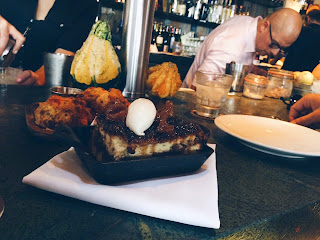 We in fact skipped breakfast that day and opted for just coffee and Kings practice in El Segundo.  Once practice was over, we headed to North Manhattan Beach which has five "cafes" all within walking distance that all serve bacisally the same thing potatoes, scrambled eggs and some kind of sandwich.  Not really anything we were in the mood for. So, naturally, this made it hard to decide on a place to eat. I was putting it out in the universe that I wanted to eat at MB Post so we left our parking spot that we didn't have to pay for and headed to "downtown" Manhattan Beach. MB Post it is! Let's just say that love is an understatement. The best part about that day, seats at the bar and no wait!

It was everything we were looking for and more and you know we gots to have the bacon cheddar biscuits.  The best part, is that they were better than I remembered. We got the See Canyon apple coffee cake with brown butter strussel and the Thai pork sausage. The sausage was so good and the flavors reminded me of being in Thailand, which is a sign of great food.  The Blood and Smoke bloody Mary was fucking amazing! With a menu so diverse, there are always hits and misses. The dumplings were a miss but I still love you. Really, I do! 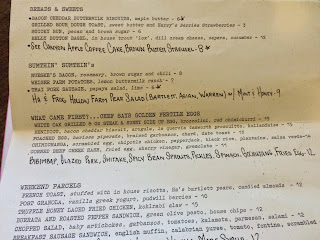 My only gripe about eating there is the people watching.  There were a lot of casual athletic clothing. If you had some self respect, you would dress yourself in noncompression clothing.  I get it, you may be in for a marathon eating sesh but seriously, I can't take you seriously. I thought people wanted to be seen eating brunch because it is  the cool thing to do? 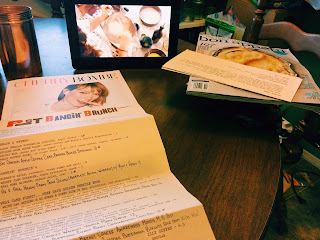 This is my, "I wake up this way" pic. I keep my MB Post menus in the first issue of Cherry Bombe...Because I'm weird.