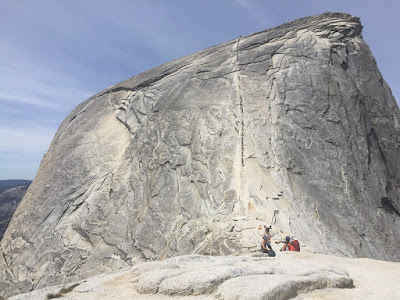 It's been a week of ups and downs, and it is not because I climbed a rock in Yosemite. But I did.  It was a great accomplishment. My brother, husband and my brothers fiancee all hiked Half Dome. It was challenging and at the end of it I swore off hiking. Then we ate strawberry paletas that were conveniently found at a food cart near the car. Then I decided that hiking is not so bad. I really enjoyed being out, you know, in nature. And I like the fact that you can eat whatever you want to at the end. Because you earned it. 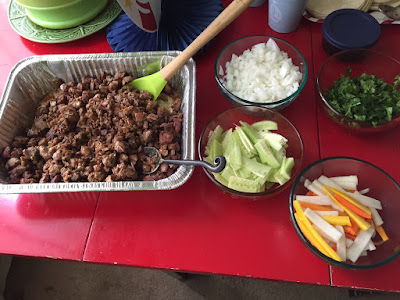 There are things that we all do to make us feel better, things to get us to get through hard times.  For me it's cooking. 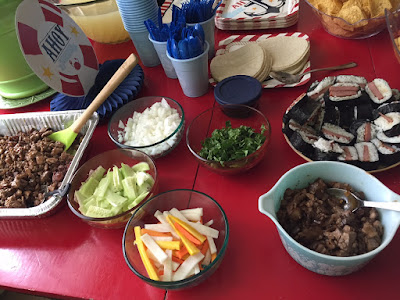 On Saturday I made food for a good friends baby shower.  It was pretty intense and I learned that my refrigerator capacity cannot easily accommodate my food, as well as food for 20 others. But I made due and with my space and all was well.

I made vegan lumpia, chicken adobo tacos, tofu adobo and Spam Musubi.  The accouterments included, pickled carrot and daikon, cucumber, a soy ginger dip for the musubi and a soy, a calamansi dip for the lumpia, onion and cilantro.  No dessert for this baby shower. However, I was able to get things done in a timely manner and had myself and the food ready before 11am.   Pat on the back moment.

For the lumipa I made a vegan version a little different than I would think most would.  I didn't add a meat substitute like tofu for fake chicken.  I used a combination of cabbage and bean sprouts to mimic the meat flavor and texture.  If I really wanted to laze this recipe up, I would have just not used meat just seasoned the normal veggies that are in lumpia maybe added potato or something but I wanted to own this one. My trick? Grinding the cabbage, the whites of the green onion and bean sprouts in a food processor and adding garlic and ginger that has been through a Microplane.  My other secret is vegan chicken flavor bouillon cubes. 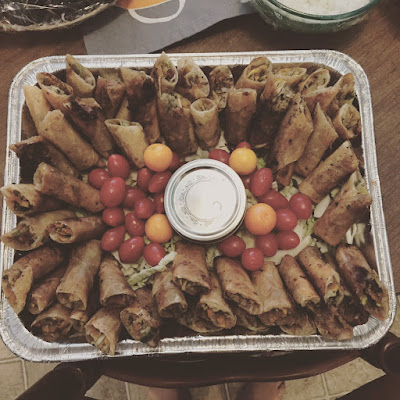 When the cabbage mixture cooks down lots of moisture is released and as opposed to draining that goodness, I used it to dissolve cube of the bouillon and that same cube totally thickens all the water and turns it to a flavorful sauce. I mean, one cube  make two cups so you get a concentrated fake chicken flavor, which is better than cabbage water flavor. I also used sesame oil and soy sauce to flavor the fake chicken water.  At then end of it it shouldn't be watery at all. Then in the last seconds of cooking, add chopped bok choy, green onions, carrots, and more sprouts. Then I let it sit for a day in the fridge.

When I am about to start wrapping them, I add one more little head of baby bok choy and sprouts, you know for texture!
I already had plans to make all this food and maybe more but more than anything, it was good to get my mind off of things, even if it was only for a few hours. Some days are easier than others and as the days go by, it gets easier. It's hard to say goodbye to someone when you can't anymore. I lived with my Lola till I was 13.  I would peel garlic when she was in the kitchen or snap the tops off of green beans. I learned how to embroider and make things.  If my Barbie wanted new clothes, she would make them.  We both loved candy and would sneak it from my mom and eat it in her room.  She loved to sing and read her Bible. She was a great woman.  She lived through World War II in the Philippines and had 6 children and loved flowers.  She appreciated a good perfume. I have a scarf she gave me a few years back and it still smells like her. She told me to keep an eye on Shane because he's too handsome and ladies are probably throwing themselves at him.  That always made me laugh, even though she was totally serious.

When she lived with my family, I made it a point to say goodnight every night. 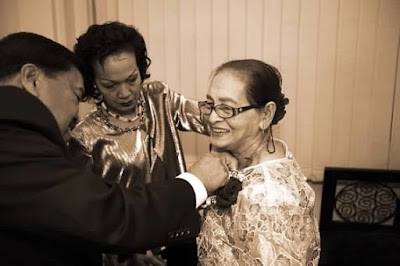 Goodnight Lola. I miss you.