Cook It Yourself: The KCRW Pie Contest #2 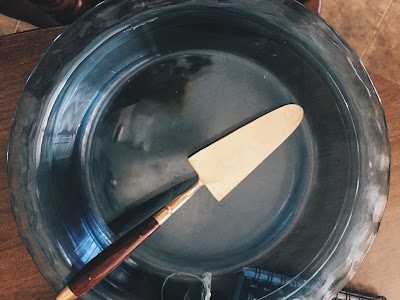 After an absence from last year, I'm back! The 8th Annual KCRW Pie Contest had come and is now gone.  I can't say it was easy, at times it was frustrating but I am happy with the result.  I didn't win but the feedback and the reactions I got from the people who tried my pie was all worth it. I feel like I won and for that I am so thankful.  So so so thankful for Melissa, who kept me company and to Judy and Ryan! To the person who asked me for the recipe, the couple who randomly tried my pie and when they walked away I watched them creeply and caught a smile from both of them. To the photographer from LA Weekly (see slide 55) who liked the silly name of the pie and took a picture. To the guy who gave me one ticket and then came back and gave me his second!!! I want to hug you all!

I think I'm really emotional because I am a week out from my period, but these emotions are all very real. My pie was humble and unpretentious, unassuming and warm. I will try try again.

Enough with the mushy stuff, time for you to Cook It Yourself!

Disclaimer: I did all the parts in the span of three days.

Rock Out With Your Broc Out, Broccoli Chicken Casserole Pie 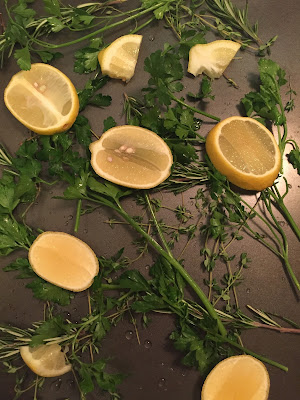 Roast your chicken
I laid out the aromatics on the bottom of a sheet pan. I used, leek tops, carrot ends, lemon, thyme, rosemary, parsley, onion butts, celery.  Toss the chicken in a bowl, pour in some oil and salt and pepper and mix it up with your hands. Lay it out on over the aromatics.  Sprinkle more salt and pepper and dot with butter and roast for 45 minutes at 375 degrees. Halfway through, take the juices from the pan and baste it over the partially cooked chicken. Rotate the pan and cook the rest of the way.

Once cooled, cut into small pieces, reserving the fattier parts for later. 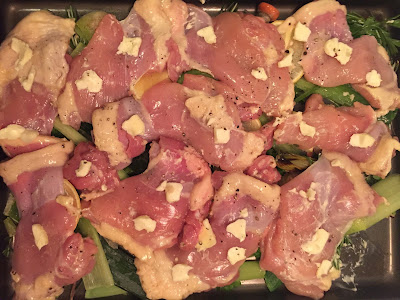 Roast your Broccoli
Cut the broccoli in small pieces, separating the florettes and using the stems making sure the tougher outer parts are peeled off.  Oil, salt and pepper the broccoli and place the sheet pan into a 350 degree oven for 25 minutes but no more than 35.
A little bit of water is okay from washing, you don't want to completely char the broccoli. 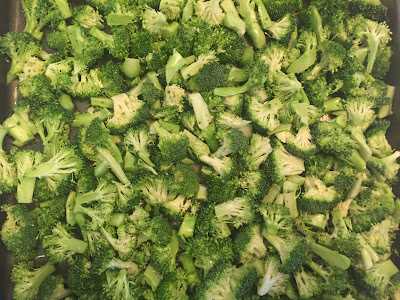 Make your cream of chicken and mushroom
This part is a bit more complex, but stick with me.

I made my own chicken broth in the pressure cooker. I call it garbage stock.  Why? You'll see. I used, chicken bones that I saved in the freezer from a roast about a month ago.  I save the tops from carrots, butts of onions, aging celery, old parsley, basically anything that can go in broth in a bag in the freezer.  So like, the greens from leeks or Parmesan rinds.  I put whatever I have in the pressure cooker at the time and add water salt, pepper and bay and follow the lead of the cooker because I have a fancy digital one. With this broth, you can now make the appro cream of (insert meat or veg)

The base for both of these is a roux. Equal parts butter to flour.  In this case, I used about 4 tablespoons.  The #majorkey is to infuse the butter with whatever flavor cream of you want to make.  So for mushroom, I chopped up a combination of button and crimini mushrooms, garlic and shallot and infused that goodness in butter.  When it felt right and smelled right, I added the flour and whisked it all on low.
Disclaimer: There is a feeling when making a roux.  It can be measured but sometimes, you have to go with your gut and not let it smell your fear.  It looks like a paste and smells sweet. Then you add the broth slowly, while whisking.  I used about 2+ cups added some heat, then mixed in so heavy cream about 3/4 of a cup to a cup.  Whisked it up.  As it heats you will feel it getting thicker When it reaches a consistency of loose lava, season with salt and pepper and remove from heat and cool.

Remember the fatty/not so pretty parts of the roast chicken you saved?  Use that to infuse the butter for cream of chicken.  Do the same thing yo did for the mushroom, just don't use the mushroms. DUH! 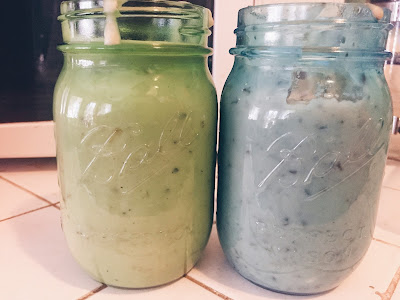 Make you crust
So I used the 3-2-1 Pie Recipe from the Ratio Book. It was really simple but I I had a few issues because I added Ritz Crackers in place of some four.  It made it crummy and in hindsight, I would change this and just roll the cracker straight into the dough. Or I would Just make the Cooks Illustrated Foolproof Pie Crust and add the Ritz in the inside of the pie.
Make enough for a top and a bottom. The 3-2-1 will make enough for a 9 inch pan. 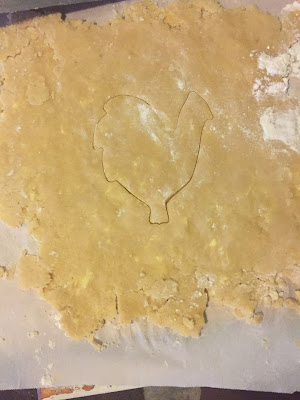 Put it all together
If you are like me and expericed trauma from pie crust don't worry it's all down hill. Roll out the dough. Breath, and carry on.

So take your cream of mushroom and chicken and mix it together.  I got a big spoonful of mayo, but no more than 3/4 cups and mix it in.  Then add the curry to taste.
Then, layer the broccoli, chicken, and cream mixture in the pie pan that has a layer of pie crust.
Cover. 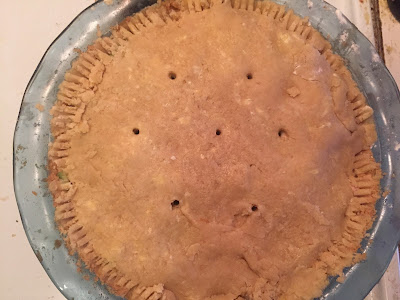 Take to the contest, serve.
I loved my pie server.  It was from an estate sale. 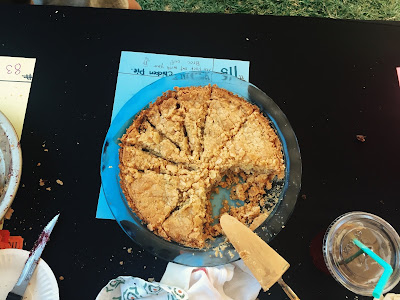 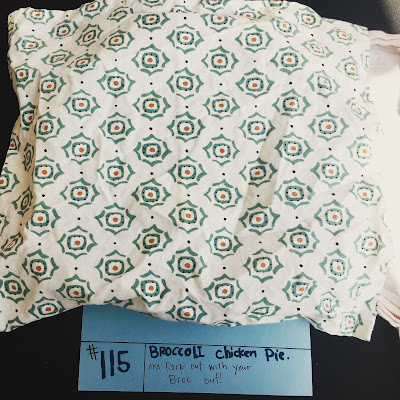 Thank you again to KCRW and everyone that tasted my pie.  It means the world and so much more to me! See you next year!

Email ThisBlogThis!Share to TwitterShare to FacebookShare to Pinterest
Labels: KCRW Pie Contest, Make it Yourself, Pie a day, Recipe