Pack Your Own Bowl 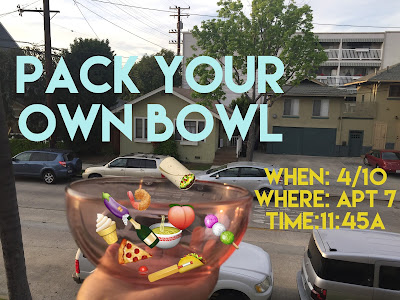 When I turned 30 I had people for a sandwich party. This year I thought it would be fun to have a Pack Your Own Bowl party. At first I thought Bring Your Bowl because I didn't think I had enough bowls and I didn't want to do the dishes.  So I settled for Pack Your Own Bowl.

I made a bunch of food that would all work well together in a bowl. What inspired me? Weed culture and Sqirl.  Food in bowls is a LA thing I guess and so is weed and I love a good 420 joke.  So Pack Your Own Bowl it was. 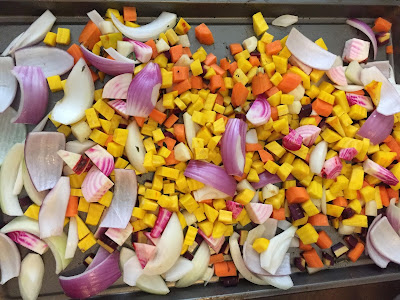 It was a week of planning and list making and then improving because things don't work out as you plan. Like going to the farmers market on Wednesday and finding chioagga beets with tops or carrots with tops.  I was also looking for ramps because it's alliums season. But they didn't have any ramps but they did have good looking red and white onions.

It took all Saturday to make almost everything.  So the menu was as follows:

If it wasn;t meat or cheese then it was basically vegan.

With the exception of the jarred roasted peppers, cornichons, baguette and ricotta the rest was homemade.  Yup I made most of it! 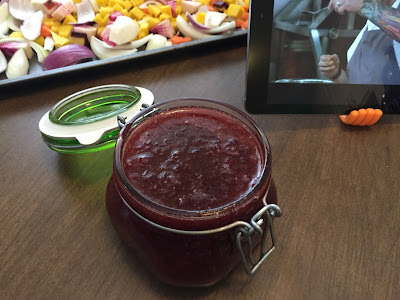 It took all Saturday to prep but I think it was worth it! There was a point when I thought I might have over planned because there was a lot of sitting around and waiting on Sunday morning.   Even after the party, I have everything cleaned and made a new batch of kombucha by 4pm.  I felt accomplished.


Someone told me that I shouldn't have to cook on my birthday.  But I love cooking and when my friends can enjoy the fruits of my labor then so be it.  At 32, I feel like I have come a long way, but I still don't feel like it.  I hope to have many more group brunches in my small apartment. So be on the lookout! 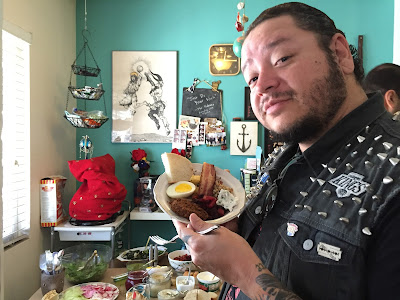 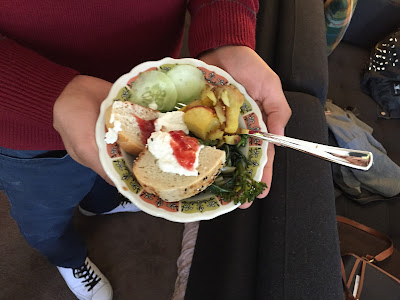 Bonus Recipe! Carrot Top, Dill, and Pistachio Vinegarette
It really has the consistency of pesto tho and it fucking vegan!

Handful of carrot tops
smaller handful of fresh dill
palmful of pistachio
half of a shallot
small spoon of grainy french mustard
somewhere between 1/4 and 1/2 cup of olive oil, extra virgin ya heard!
about 1/4 cup of white wine vinegar add more to your taste likings
1/2 of lemon juice and the zest
salt, I used salt gris, generous pinch
pepper
Put all solids in a food processor along with lemon juice zest and salt and process till chopped fine.  Scrape down sides of bowl.  Turn on and stream in vinegar.  Scrape down the sides again.  Turn it on and stream in olive oil.  The amount really depends on the consistency you prefer. I like it like pesto.  I let it sit overnight in the fridge and serve.

I got a really good response from this and I made it up!
EDIT: It was also featured in the Holistic Yogi! I highly suggest signing up for her weekly emails! 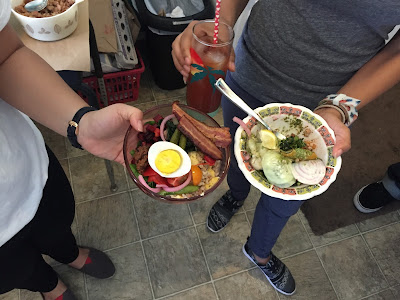 Special Thank You to everyone who came and ate and watched Moto GP!
Posted by Eizelle at 9:17 PM