I like poke.  I like it a lot.  But when I eat it I can't help but feel guilty. Contrary to the saying, there isn't an plenty of fish in the sea and I can't float along life eating unsustainable fish. But I still do it. I am a human that likes all food.  I would prefer to know where the sea creature I am going to eat is coming from but cravings beat conscience everytime.  I like to think that I am conservative in my seafood consumption and I like to think that with recipes like this it will help others be conservative in their sea friend consumption as well.

I like golden beets and if I could find a chioggia beet I would have used that too.  I think it would have looked like salmon and some kind of tuna and that kind of pretty-ness cannot be replicated with tofu.  This recipe is based on Action Bronson's Beet Poke. I tweaked it a bit 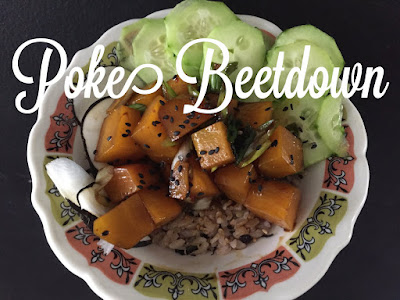 Poke Beetdown
I wrote this recipe for Basirah at Holistic Yogi Every Wednesday I look forward to her weekly affirmation. Click the link to sign up! 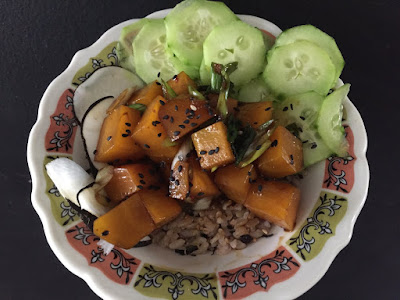